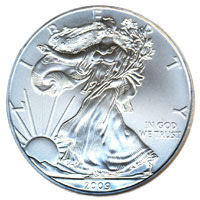 It is really quite simply, all the financial markets are of course rigged with derivatives and futures which are just another name for selling something that does not exist. The gold market is to big to crash for the American patriot, but the Silver market. There we have vulnerability to organized systematic purchases en masse to break free the price from fixing by J.P Morgan and Comex. There is a mere 1 Billion dollars in invest-able silver in the world give or take a few hundred million.
Currently the whole U.S. Silver production is 40 million oz. The U.S. Treasury is on pace to break the all-time record for U.S. Silver Eagles. July of 2010 was the 7th best month on record for U.S. Eagles sales coming in at 2,981,000 oz of Silver during a traditionally slow summer period. With a surge in the latter part of the year U.S. Eagle sales could top 40 million oz more than all the Silver mined in the U.S. Another little known fact is that U.S. Eagles sales need to come from Silver mined in the U.S. That means it is possible that the Mint may have to suspend Eagles sales later in the year driving the price of physical bullion through the roof. This would destroy all of the price fixing across the board with commodites from Gold to wheat. You are essentially putting the death kneel into the skull of the Federal Reserve bank. So if you are looking for a non-violent solution to remedy the corruption of the fiat currency system, buy up them eagles. For small purchases, I have found that provident metals is the best bet and for purchases over 100oz Monex is the man. Paul Bea is the account rep at Monex. His number is 800-949-4653 x2172. Use Kevin from Uscivilflags as referral, I get a couple of coins. Below are some factoids about U.S. Eagles.