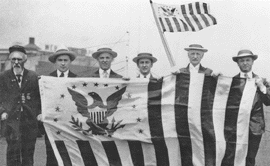 Nathaniel Hawthorne describes the Civil Flag of the United States for us in a chapter of the Scarlet Letter titled “The Custom House”. As Hawthorne gives a description of the Custom House in Salem he writes:

“From the loftiest point on its roof, during precisely three and a half hours of each forenoon, floats or droops, in the breeze or calm, the banner of the republic; but with the thirteen stripes turned vertically, instead of horizontally, and thus indicating that a civil, and not a military post of Uncle Sam’s government, is here established.”

Some historians believe that the Civil Flag was discontinued after the Civil War when the federal government imposed military governments in the States and disbanded civilian government. As a show of it's power over the States, Civil Flags were discontinued and Old Glory became the sole emblem representing the People of the United States of America, united under military (or admiralty) rule. This is illustrated by the mention in Andrew Johnson’s appeal to the people of Tennessee on March, 18, 1862, when he said in part “.... the President conducted this mighty contest, until as Commander-in chief of the Army, he has caused the national flag again to float undisputed over the Capitol of our State.”

The practice of using the Customs Flag as a Civil Flag became encoded in law in 1874 when Treasury Secretary William. A. Richardson required all customhouses to fly the Civil Flag. The Civil Flag had all but disappeared, by 1900, except for the occasional use by the government's revenue cutters and more recently, the Coast Guard with a modified design in 1915. At that time the U.S. Coast Guard became an independent bureau from the Treasury Department, absorbing the Revenue Cutter Service. The Civil Flag used by the cutter service was modified and adopted under Coast Guard authority, losing it's original significance of civilian authority, which by then, had been long forgotten as the Federal government acquired more control over the States and their citizens.
From the time of the Civil War onward, the government of the United States continued under military rule. All subsequent actions of congress and the President were carried our under the War Powers. The President acted under the authority of his office as Commander-in-Chief of the Armed forces. It was in this capacity that William Howard Taft issued his Executive order of June 24, 1912 specifying the size and demotions of the Flag of the United States.
It appears the elimination of the Civilian flag in practice and in Law was another way to limit the Sovereignty of the American People. Another trick of the wizard to get God's people to cede their rights willingly to the State. The growth of the modern U.S. Civil Flag in usage is another sign of the resurgence of knowledge within the core of the American patriot movement, or you could call it the Second American Revolution.
Source
Posted by kbcjedi at 7:46 PM No comments:

Alan Keyes is the latest to file suit against Barack Obama demanding him to prove that he is a Natural Born Citizen as per the The U.S. Constition's requirements.
The United States Constitution

The Constitution of the United States of America specifies that the President of the United States must be a 'natural born' citizen. Barak Obama has NOT produced a certified copy of his ORIGINAL 1961 birth certificate prepared at the time of birth.
VS An Abstract?
All he has produced is a laser printed ABSTRACT that was printed out on June 6, 2007. This abstract is a summary of what Hawaii has on their computers. There is allegedly more information relevant to the matter on the original 1961 long form birth certificate.

There are strong allegations that Barak Hussein Obama is not who he claims to be. This is a synopsis of what is going on around the nation regarding Obama's eligibility to serve as President. In one case, documents allege that there are 17 cases on the books right now. Apparently, people involved wish to remain anonymous for the time being due to the danger of this issue. Sources have alleged that there IS a 29 elector suite somewhere in the courts and 16 other cases yet to be filed. If you have any credible information on those please let me know.
Americans

We have received a lot of emails asking what you can do to be heard regarding the issues pending before the U.S. Supreme Court. Although we cannot tell you to do anything, we can answer your questions and inform you what is available, so you may be heard.

You as citizens can individually address letters to all the Court Justices and address your concerns regarding Mr. Obama's eligibility to serve as the President of the United States according to the requirements of Article II, Section 1 of the U.S. Constitution.

The Supreme Court Justices are as follows:

We can do it!
ObamaCrimes.com
Posted by kbcjedi at 12:01 AM 2 comments: