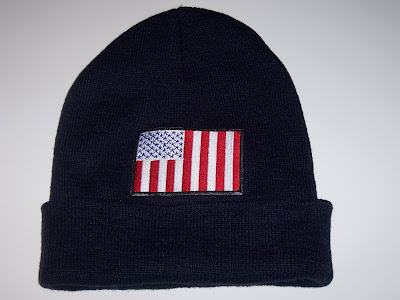 While I was digging through my old emails, I ran across a website that talked about a vertical striped American flag called the Ensign. The American Ensign flag had 35 stars with 13 Vertical Red and White Stripes. The "Cartel for the Exchange of Prisoners of War between Great Britain and the United States of America," dated May 12, 1813 mentions a flag called the American Ensign. The exact origin and use of this flag is not known. A picture of the American Ensign may be found in Illuminated History of North America (1860). The American Ensign incorporates the blue stars similar to those of the Revolutionary war era Guilford Flag and the vertical stripes of the Civil Flag of the United States.
The Civilian Flag of the United States of America was flown, for over 100 years, by a select citizenry that could afford to buy them. Most used the design of the Customs Bureau and it's American Eagle, many used the design of the American Ensign. These were not official flags like those created by Congress for military use, but existed more or less by custom.
ome historians believe that the Civil Flag was discontinued after the Civil War when the federal government imposed military governments in the States and disbanded civilian government. As a show of it's power over the States, Civil Flags were discontinued and Old Glory became the sole emblem representing the People of the United States of America, united under military (or admiralty) rule.
So, apparently there is more legitimacy to the Civilflag than I originally thought and it is tied up with the concept of Sovereignty for WE THE PEOPLE and the country as a whole.
I have added Civil flag Ski caps as well as the Sons of Liberty for $14.95. I am branding the U.S. Civil flag image to break the blind patriotism usually associated with Tyrannical governments. Like the Wizard of Oz we have been hypnotized into accepting all forms of injustices both here at home as well as abroad. It is up to We The People to right the sinking ship.
I discovered the Pistol Petals shell casings line at a Gun show in Middleton NY. I thought it was a great concept, sort of like recycling or tree hugging for Republicans. The right to bear arms shall not be infringed, now more then ever. But what happens to all those empty shell casings? Style #2 is available in a 9mm made with hand hammered sterling silver wire. This style comes as a necklace or a pin fully packaged on a card in an organza pouch, a SS chain is included with the necklace. Artist, Jeni crafts all of her Pistol Petals from SS wire, brass ammunition cartridges in a variety of calibers, sometimes even including genuine gem stones. Many of the shells used in this project were even fired by Jeni!
There are a few small victories in the Patriot movement, like the introduction of a True Gold and Silver bank run by the Lakota tribe. For small investors the prices are not very cost effective, but if you can come up with enough for a purchase of 500 Silver oz, the price per OZ drops to $14.50 which is in line with the best Silver sellers. Currently there is a premium of 40-50% on physical Silver delivered. The comex market is about to Crash in Dec. when the futures come due, it 3% take delivery on the futures contract that Comex is depleted of all it's Silver supplies. Silver historically is a 15-1 price ration to Gold. Currently the ratio is 80-1. If the price returns to it's historic level s of 15-1, then you are talking a Silver price of over $53 per OZ, that is not including the fact that Silver is now rarer than Gold. For an excellent Silver supplier, there is Apmex.com.
The more Silver and Gold you actually take possession of, the more you will eliminate the hold of the FED. The Bankers cannot amortize your physical possession of Gold and Silver. There is also a one hour radio show I did on the U.S. Civil flag with Rumormillnewsradio.com, the link is on the bottom of the frontpage of U.S. Civilflags.org
Posted by kbcjedi at 1:06 PM No comments:

Obama's Secretary of Commerce Pick says Obama is an Immigrant

Just when you thought the Obama Birth Certificate Fraud charge had been solved by the silence of the Media and the supreme Court; Bill Richardson comes along and promotes Obama as an immigrant to the Hispanic Community. Bill Richardson is the sitting governor of New Mexico and ran for President against the Foreign-born Barack Hussein Obama.
At what point is enough... enough?

Posted by kbcjedi at 8:42 AM No comments: